The Mothers of Invention: Rugby on a Roll at UMW | URugby | College Rugby and High School Rugby
Skip to main content

The Mothers of Invention: Rugby on a Roll at UMW

Rugby is on a roll at the University of Mary Washington, where new initiatives and impressive facilities signal a desire to become a collegiate hub for this fast-growing sport in the U.S.

Tim Brown, director of rugby at UMW in Fredericksburg, Va., has been pretty busy lately. In addition to gearing up for a spring season that kicked off last week with a nine-day Ireland Tour of Munster and Leinster, the UMW Men's Rugby Club (nicknamed "The Mothers") played host to the first Leicester Tigers High School Team Camp Feb. 13-15.

The sold-out camp brought together 16 teams and 300 participants, 70 coaches, and attendees from California to Canada to Florida. Seven members of the legendary Leicester (England) rugby club worked with coaches and players on essential skills and high-level tactics in what Brown describes as an effort to both grow the game in the USA and scout talent.

In a sign of the school’s commitment to rugby, UMW will be bringing Leicester staff to Fredericksburg full time starting in the fall, becoming the only university rugby program in America to partner with an English Premiership Club.

Working with the academic team, The Mothers also have an exchange agreement with University College Cork in Ireland where any player can go abroad to study and train with the club, and vice versa.

Rugby on the Rise at Mary Washington

A new rugby facility puts the sport “front and center” in this historic college town, Brown says. “The school is investing almost $2 million in a rugby-specific facility right in the middle of old-town Fredericksburg."

University administration is working with admissions to make Mary Washington a center for the sport, Brown says, with university president Richard V. Hurley even going so far as to call UMW a "rugby school.”

Applications are up and so is the quality of play—with scholarship money still remaining for fall 2015. 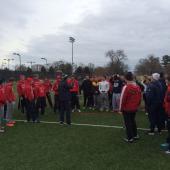 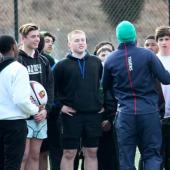 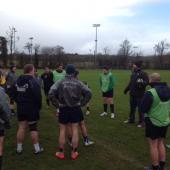