Taking Rugby to the Next Level

The reviews are in, and the ACRC Bowl Series is getting high praise from the world of rugby. "I got to say this, the ACRC Bowl Event ... was absolutely fantastic," Bruce McLean, head coach of the Iona College RFC, said on Goff Rugby Report's Ruggamatrix America Podcast. "The [Rugby Athletic Center] was beyond our expectations—I don't think the website does it justice. The event that Sevens Sports ran was second to none, first class ... everything was running like clockwork."

Praise like this, as well the enthusiastic responses from teams and spectators on social media and during the event, was great to hear. Even better was watching great college teams come together over two days to test themselves against the very best from other conferences around the country. 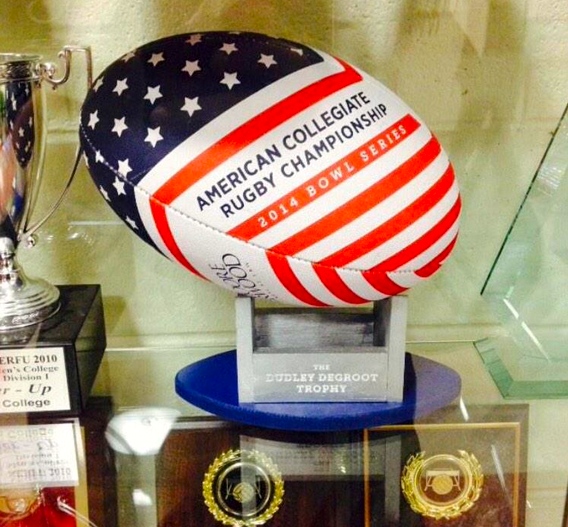 The Dudley DeGroot trophy sits proudly in the trophy case at Boston College. The Eagles beat Iona in a hard-fought, close contest at the Bowl Series on Friday night.

Next Level Rugby CEO (and University of Hartford men's rugby head coach) Ryan Ginty deserves a special shout-out for webcasting eight of the nine games over two days. Recognizing the importance of the Bowl Series, Ginty made some last-minute purchases to beef up his technical capabilities and took up residence next to the announcer's booth. Anyone within earshot of Ginty and the announcing crew enjoyed a crash course in the ins-and-outs of the game, as well as plenty of entertaining banter and anecdotes.

More about Next Level Rugby »

Next Level Rugby and Sevens Sports' partner in covering the event was Alex Goff's Goff Rugby Report, which provides comprehensive coverage of rugby on the high school, college and national level. Livestreams were hosted on Goff Rugby's YouTube page.

More about the Goff Rugby Report »

Check out the live streams on You Tube »

With the 2014 Bowl Series in the books, people are already looking forward to the 2015 ACRC Bowl Series.

About the ACRC Bowl Series

The tournament is managed by URugby, a division of Sevens Sports LLC, a sports event management and marketing company specializing in creating great experiences around the sport of rugby.