American International College (AIC) earned their third consecutive bid to the 2016 Bowl Series and took on the host university, Iona College. Iona led at halftime 7-5. AIC went on to win with a strong second half by a margin of 26-7.

Though AIC went undefeated in the 2016 season and secured their third consecutive East Coast Rugby Conference (ECRC) championship, AIC tied rival Boston College in their final match. AIC went on to defeat Binghamton University by a large margin a week before the Bowl Series in 2016.

At the 2015 ACRC Bowl Series, AIC took on and defeated ACRL champs Clemson on Nov. 21 at Charlotte's Rugby Athletic Center. AIC went undefeated in the 2015 season and secured their second consecutive East Coast Rugby Conference (ECRC) championship with a 72-21 win over Boston College on Nov. 7.

As October drew to a close, AIC was 7-0 in the ECRC, including wins over UMass, UConn and New England College. In out-of-conference games this fall, the Yellow Jackets defeated Ivy power Dartmouth and, most notably, Penn State—proving they are equal to all comers in the fiercely competitive world of D1 collegiate rugby.

AIC were victorious against Bowling Green at the 2014 Bowl Series in a game Goff would name its College Game of the Year. They were champions at the 2014 ACRC 7s in Virginia Beach, as well as achieving first-place finishes at the Al Baker 7s, the Middlebury 7s and Armory College 7s. They were ECRC champions in fall 2014. In 15s play in the fall of 2013, AIC went 7-1 and finished second to Middlebury in ECRC standings before defeating St. Bonaventure in a cross-conference American Collegiate Rugby Association (ACRA) bowl game.

As one of the better-supported collegiate rugby programs in the country, AIC rugby offers scholarships for domestic and international students and employs a full-time coach. Rugby is one of two sports in which AIC, a school of 1700 undergraduates located in Springfield, Mass., participates in Division I. 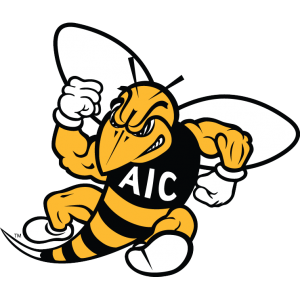