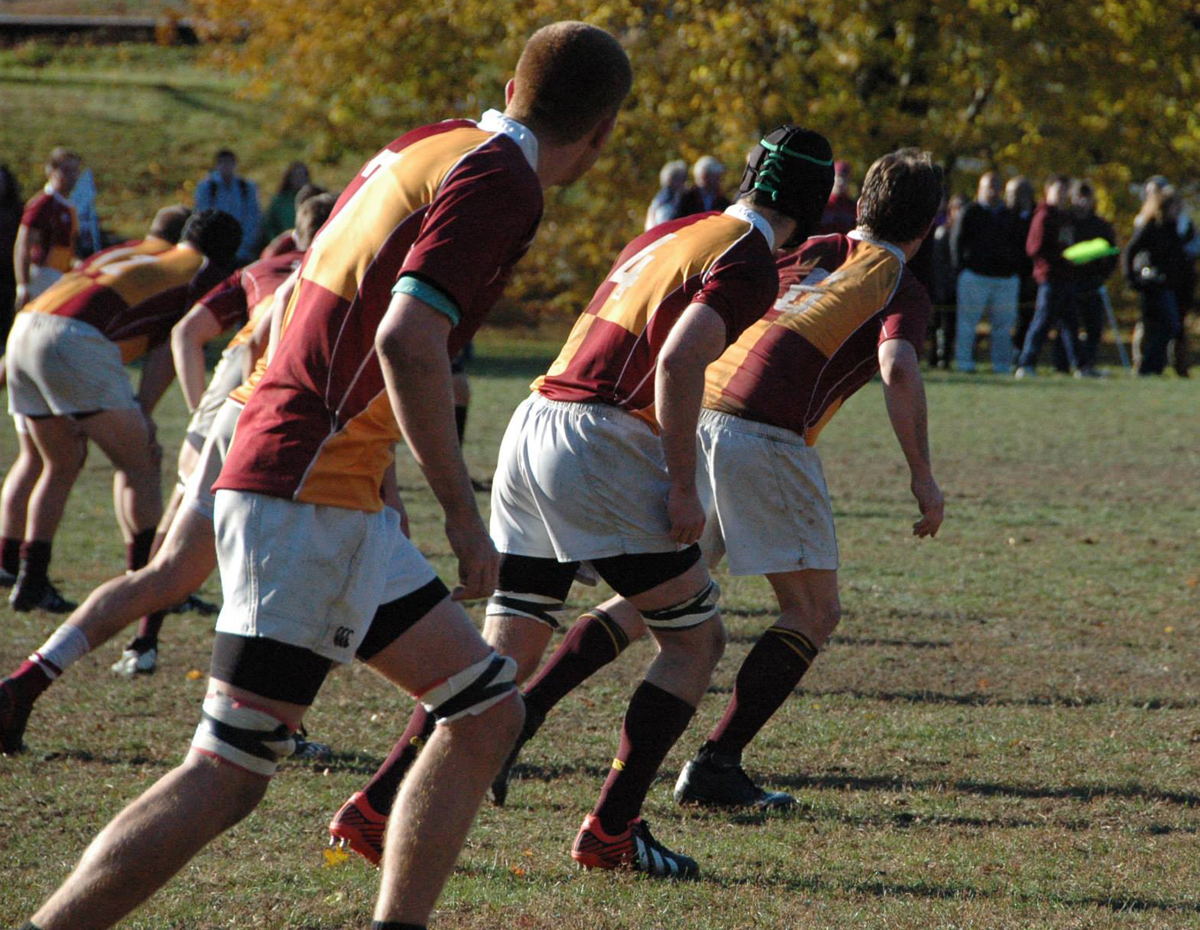 BOSTON, Mass.—In the highly anticipated battle of the birds and the bees, American International College men's rugby topped their East Coast Rugby Conference foes, Boston College, by a 31-17 final at Chestnut Hill to preserve their undefeated mark for the season and take sole possession of first place in the ECRC.

AIC improves to 5-0 on the season and in conference play, with one game left in the ECRC.

For nearly a half hour, the teams battled in the mud, with neither side able to break through for anything as the two best teams in the conference fought desperately for the key first points. In the thirtieth minute, however, home field advantage took on literal meaning as an AIC defender slipped in the mud, allowing the Eagles to fly into the try zone out wide for a 5-0 edge.

Five minutes later, the Yellow Jackets swarmed back, and Jihad Khabir came out of a line break with a slick no-look one-handed pass to Christian Adams, who was able to bring the ball in under the posts for the score and made the conversion by Bryce Neff afterwards much easier, allowing AIC to head into the halftime up by a count of 7-5.

The offenses came alive in the second half, as AIC scored what head coach Josh Macy called "the best team try of the year so far." Seth Halliman hit Deshae Edwards with a pass down the right sideline, and after Edwards burned a pair of defenders, he was able to make a pass himself that ultimately ended up in Gavan D'Amore-Morrison's hands and downed in the try zone under the posts in the fifty-third minute, again allowing Neff to convert for a 14-5 lead.

Macy was particularly impressed with Halliman's performance on the day, saying that the "First time starter…really led the way outside."

Seven minutes later, the forwards pushed their way through the Eagles defense, with Adams diving into the try zone to put his side up 19-5.

The Eagles rallied right back and took advantage of a mistake as a bad kick by AIC was quickly driven down into the try zone in the sixty-fifth minute to bring the Eagles within nine at 19-10.

That would be as close as the hosts could get, as three minutes later Adams finished the hat trick by busting through a counter-attack and taking the ball three-quarters of the length of the field down the sideline to put his squad up 24-10.

In the seventy-fourth minute, AIC scored another, as Khabir kicked the ball toward the corner of the Eagles' try zone, and Halliman drove in to force a turnover which Khabir was able to gather and put down, and Neff converted one more time for the 31-10 edge.

BC scored late and made their only conversion of the game immediately thereafter, but it was not enough as they lost for the first time on the season.

Macy's assessment of his squad's performance was a positive one, as was his assessment of his team's position heading into the final week of conference play: "Despite giving up our highest point total, I was very happy with our defensive progress. BC has a really savvy attack and we took away a lot of options."

He added, "We control our own destiny in the conference leading into the last game. What coach wouldn't be happy with that?"

That final conference game is at home, Sunday October 26, at 2:00 p.m. against Middlebury College, the start of a two-game homestand to close out the regular season before the ECRC playoffs.