Before the fall of 2017, the BC Eagles competed in the East Coast Rugby Conference.

The Eagles kicked off their 2015 fall with a big preseason wins over Dartmouth before a 7-1 regular season that saw wins over Middlebury, New England College and Fairfield among others. BC squared off against Alabama at the 2015 ACRC Bowl Series on Friday, Nov. 20 at 8:30pm.

Boston College finished second in the ECRC this fall behind AIC. They were winners over Iona at the 2014 Bowl Series.

So far this season we’ve faced multiple teams with lots of varied styles of play. By far the one side that tested us was NEC with their very physical gameplay.

The second half vs. Dartmouth I believe was the moment that our players found the confidence and self-belief in their abilities to take on the best with their speed of attack and hardened defense.

We play a very dynamic style game. We excel at in-game continuity and enjoy moving the point of attack as much as possible.

Who are your two standout players?

It’s hard to just pick 2 players after a long season where almost every player has scored and every player contributes in all phases of the game, attack and defense.

The two players that are consistently on the podium for man of the match would be Tom Edwards at #8 (Senior, Westfield, NJ) and Danny Schatzman at 2nd Centre (Junior, San Jose, CA).

The Boston College Rugby Football Club (BCRFC), founded in 1968, has an impressive 44 year history on the pitch, in the classroom and after graduation. With league play every fall and tournaments during the spring, BCRFC fields three sides - A, B and Developmental - with over 80 players participating each year. BCRFC nears its 45th Anniversary and has produced All Americans as well as players for the USA Eagles national team. 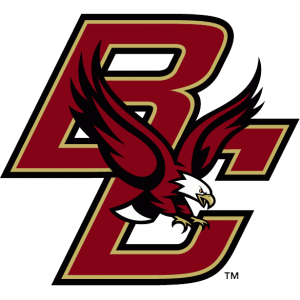