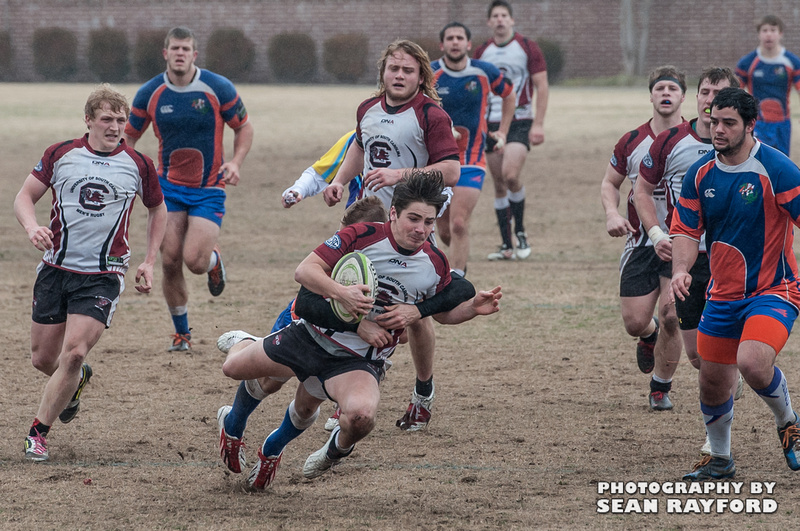 Columbia, SC - Carolina Rugby hosted the University of Vanderbilt this past weekend and came out victorious over the Commodores, 76-10.

Vanderbilt opened up the first half on a high note with a penalty kick attempt 35m out, though would miss to keep the match scoreless early on. Consecutive penalties on both sides of the ball kept play between the 22’s until the Carolina backline put together a quick string of passes out wide to junior fullback Tim Hamill who escaped the sideline and touched it down beneath the posts for the first points of the match. Junior scrum half Brian Keown would miss the conversion to keep the score at 5-0.

Following the kickoff, Carolina adjusted their attack pattern, alternating pack play to suck in Vanderbilt’s defensive line before quickly getting it out wide to the backs for steady gains in possession. At 10m out, Carolina’s 8-man picks it up off the scrum and offloads to Keown who touches it down for the try. The conversion brings it to 12-0 Carolina. The Gamecocks return the kickoff with quick pack play, keeping Vanderbilt on their back feet, and eventually get it out wide to sophomore wing Thomas Coar who runs the gap and touches down to make it 17-0.

Vanderbilt would increase their intensity around the rucks and turn Carolina away twice within 5m of the goal line, though the Gamecocks would not be denied a third time with a hard charge up the middle by Keown for the try. Carolina would answer again with a hard run by junior flanker Dana Corcoran who makes the last second pass to senior lock Zac Gorman for the try, bringing the score to 29-0. The Carolina forwards would take the kickoff again, though knock it on within 15m of the goal line. Luckily, the Gamecocks win the scrum, and like his first, Keown receives the ball off an 8-man pick and touches it down for his third try of the afternoon.

Vanderbilt steals the next kickoff, though loses it out the back, setting Carolina up for a 22m kick that bounces their way with help, giving them the lineout deep in Commodore territory. Again, the Gamecocks get it out wide to Hamill who scores in the far corner, increasing Carolina’s lead to 41-0. Vanderbilt will steal the kickoff again and elect to go for points more than 40m out off of a penalty in the ruck. The kick is successful, giving Vanderbilt their first points of the afternoon and capping off the first half at 41-3, Carolina.

The Gamecocks would continue their fast style of play, forcing the turnover after the kick and using their back line in a pendulum motion to create the overload for Coar to score his second try. Carolina would repeat the tactic, though improved defense would force an up and over kick that was recovered nicely at midfield by freshman center Chris Harrell who would run it back for the try, advancing the score to 55-3.

Vanderbilt would steal the kick for a third time, though quickly lose possession off an interception by Keown who returns it 80m for his fourth and final try of the afternoon. Carolina would answer again with a 10m run by junior flanker Jared Magill, bringing the score to 69-3, Carolina.

The next 15 minutes would see back and forth possession until freshman flyhalf Nick Pagel hits the gap off a scrum 5m out for a Carolina try. Vanderbilt would quickly respond with their only try of the day, successfully converting, ending the match 76-10. Man of the Match honors were awarded to senior hooker Drew Busbee from Charlotte, NC and junior scrum half Brian Keown from Newton Square, PA.

“I’m proud of the boys for putting together a full 80 minutes of rugby,” stated Head Coach Mark Morris. “We used all our reserves, giving everyone valuable playing time, and we adjusted to our opposition much quicker than in weeks past. The best news is that we didn’t have any injuries, so that helps us with our lead up to Tennessee in two weeks.”

Carolina’s match with Tennessee will determine who goes undefeated in the regular season, and, more importantly, who wins the Eastern Division. “We’ll keep the intensity up and do our best to finish the season out strong. It’s been our goal since day one.”

The Gamecocks return to action Saturday, November 8th against the University of Tennessee Volunteers for a 1:00pm kickoff in Knoxville, TN. A reserve match will follow.