Notre Dame College @NDCFalconRugby has just announced that they will be attending the 2015 @ACRCBowlSeries. The Falcons faced and defeated Syracuse University Rugby @Cuse_Rugby in a Friday evening clash Nov 20th at the Rugby Athletic Center in Charlotte, NC.

The NDC Falcons rugby program has risen quickly into the ranks of the elite, both on the men's and women's side. Residing within the athletics program, NDC Rugby offers men's and women's Varsity club rugby and rugby scholarships.

The Notre Dame College Falcons were champions of the MARC conference for the second time in 2014.

We have a very young but athletic team that has come a long way in the last year. We have some terrific individual athletes who are quickly learning how to play as a team.

NDC rugby players are fully supported by the administration, athletic dept, and faculty. NDC Rugby athletes are treated like D1 NCAA athletes. They also have the respect of all the other (26 sports) NCAA D2 athletes on campus. Rugby in not treated as a 2nd tier sport at NDC!

The president of the college, Tom Kruczek, who got his undergraduate and MBA degrees from the University of Notre Dame, was on hand earlier in the season with his wife to do the coin toss when NDC beat host UND 60-12. 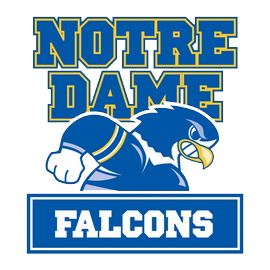