West Virginia University brings a tough, battle-tested squad to the ACRC Bowl Series. The Mountaineers, 3-0 in regular season play, defeated St. Joseph's University to capture the Keystone championship. They beat Temple the previous week to advance to the conference finals.

Who are your two best current players?

Ryan has been an immense player for WVU this year and has brought experience and leadership to our squad. Blythe has been a tremendous asset for the Mountaineers scoring a total of 8 tries in the regular season (Conference Leader) and an impressive 4 tries in the semi final match against Temple University. His power and skill in the loose combined with his aggression and strength at the breakdown make him a very threatening force on the field.

Kris is an exceptionally versatile player and has been a part of the WVU starting XV since his freshman year. He is comfortable playing both 9 or 10 but is perhaps most comfortable at the scrum half berth. Although he didn’t notch up many of his own tries this year he has been involved in the majority of WVU’s scoring plays. An incredible talent and captain on the field.

Most significant accomplishments over the last 2-3 years?

WVU won the Keystone Conference for the first time in 2013 after returning from a disappointing 0-6 season the year before. The WVURFC has seen an incredible turnaround and has gone from strength to strength in the past two years. After winning the Keystone Conference they progressed to the D1-AA USA Rugby Playoffs last year, defeating Princeton 41-24 in the first round. Unfortunately they fell to San Diego University 34-14 in the quarter finals. Last year the Mountaineers defeated D1-A local side Wheeling Jesuit in front of a capacity home crowd and has been on the search for big name teams to play against which makes the ACRC Bowl Series an exciting challenge.

How has your team progressed in recent years?

After a disappointing 0-6 Keystone finish in 2012 there was a great need to restructure the club and improve performance. Coach Glover was brought on as Head Coach in 2013 which helped to provide better support and structure at training. This helped steer the Mountaineers to a 5-1 finish in 2013 which secured the D1-AA Keystone Conference title. In 2014 Coach Perrella was brought on board as Strength & Conditioning Coach which has added a further element of professionalism and support to our players and program.

These personnel additions as well as the development of a floodlit artificial turf field specifically for rugby at WVU have all helped to develop and improve the WVURFC program. WVU administrators have started to provide better support both financially and logistically as our progress and growth continues. We have also enjoyed fantastic parent support, notably from Patrick and Rhonda Lockwood, the Antonucci family, Pugh family and many more.

West Virginia is currently enjoying a 6-1 season with their only loss suffered in a pre-season friendly against D1-A neighbors Wheeling Jesuit University. West Virginia has had another impressive Keystone season and is aiming to secure a back-to-back win of the conference. The Mountaineers started the season with a convincing win in cross-division play against West Chester University. From there, they kept the winning going and beat Shippensburg, Millersville, and Pitt to secure the West division title while only conceding 21 points. In the semi-finals, they really hit their stride and took care of Temple 66-0 in a commanding performance in Morgantown WV. The Mountaineers have several seniors on which their success and leadership lies including Keystone lead point scorer Chris Mackenrodt, captain Kris Wilson, co-captain Derek Antonucci and All-American Ryan Blythe.

Who are your main conference rivals?

Traditionally WVU enjoys a superb rivalry against close neighbors Pitt and these two teams have enjoyed continuing the traditions of the ‘Backyard Brawl’ every year. No matter what standard each team is at in the season it is guaranteed that both will bring their best against one another.

​What characterizes your style of play?

We have been a very defensively focused team this year and have developed a strong defensive pattern. The players are proud to have only conceded 3 tries in 5 games within our conference. We are well drilled and conditioned in defense and this results in a lot of pressure being exerted on opposition offenses. We have also developed a strong and mobile pack who blend in well with the backline, supporting and running lines throughout the park.

The West Virginia University Men’s Rugby Club was founded in 1976 becoming WVU’s first recognized club sport. In that same year the ‘I used to be a Chicken, but now I play Rugby’ tournament was established and has been running annually every year since. Training and matches were played at the grass pitches located at the Coliseum which is now to location of the WVU Marching Band practice ground.

Current head coach Richard Glover took over in the Spring of 2013 and managed to help steer WVU into winning ways again. They finished the Spring season with a 12W 1D 2L record and narrowly lost out to Miami of Ohio in the semifinals of the 2013 Cherry Blossom Tournament. WVU ended their Spring 2013 season hosting the 39th annual Chicken Tournament which they went on to win as undefeated champions. WVU go into the Fall 2013 season with aspirations for a minimum of a top 2 finish in the Keystone Conference. 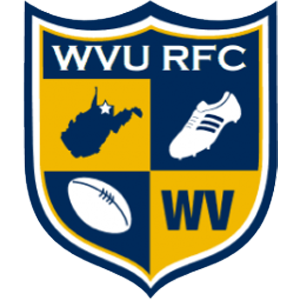